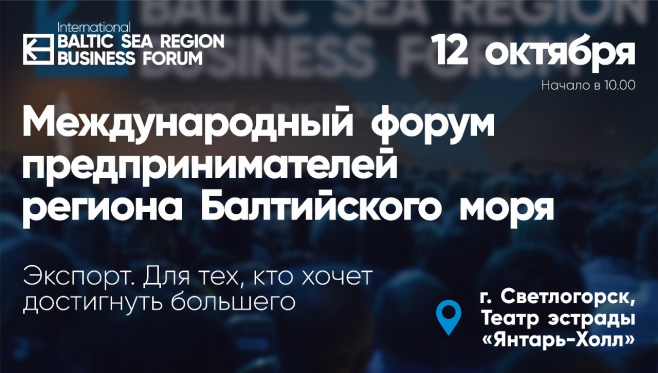 The organizers of the International Forum for Entrepreneurs of the Baltic Sea Region, which was held in Svetlogorsk on October 12, were the regional foundation “Center for the Support of Entrepreneurship” and the government of the Kaliningrad region. Valery Voytyuk took part in the session «Industrial Clusters as a Tool to Promote Industrial Production. Government support measures». The session was moderated by Andrei Shpilenko, director of the Association of Clusters and Technology parks of Russia.

The participants discussed the documents of the Federal Ministry of Economic Development, which proposes a new initiative to stimulate the development of SMEs. The national project to ensure preferential access of companies in the SME sector to production facilities involves the creation of at least 129 industrial and technology parks in the country. In particular, in the areas of high technology and agro-industry. The federal agency plans to allocate subsidies in order to reimburse part of the cost of their creation, subject to co-financing from the budget of the region. In addition, the project must have at least 20% of extra-budgetary investments. The amount of subsidies varies from 250 to 500 million RUB.

The Minister of Industrial Policy, Development of Entrepreneurship and Trade of the Kaliningrad Region Dmitry Kuskov promised that his department would do their best to prepare a high-quality application and fight for funding from the federal budget.

Valery Voytyuk drew the attention of the session participants to the problem points in the provisions of the regulatory documents on support measures to the participants of industrial clusters and SMEs.

For example, it is proposed to support manufacturers of industrial products of the industrial cluster included in the product range as part of industry plans for import substitution. And what about SMEs that produce innovative products that have no analogues among those imported? This approach eliminates the support of the most advanced entrepreneurs who produce unique products.

It is also debatable that support measures should be received only by those cluster enterprises that will achieve the fifth year from the start of the joint project to increase the number of high-performance jobs in the amount of at least 15 percent of the total average staff number of the initiators of the joint project. But often, the implementation of new projects today is aimed at producing products using technological equipment with a high degree of automation, which leads to a reduction in jobs. This provision of regulations requires a sensible adjustment.

In total, Valery Voytyuk offered to discuss more than 15 comments. All participants in the session agreed on the urgency of these problems, and Andrei Shpilenko suggested SME, in a dialogue with the Kaliningrad government, to send the proposals for finalizing the documents. to Moscow.